This is a blog I wrote for the TMA – Transverse Myelitis Association.

It was a sunny day. I remember the early morning sunshine pouring in through the living room window shaming me into hooving up all the dust. Typically, the hoover bag needed changing first, so while squinting because of the sunlight I bent down to take out the bag. That was when it hit. A sharp, stabbing pain in my lower back.

The handmaids are always going to be a provocative image whether or not you’ve seen or read A Handmaid’s Tale and could be used for many a subject for a blog. The title of this post could be used for many a subject too, I’ve used the term in relation to bullies, cyberbullying and general feminist discussions. However, this time I want to talk about pro-choice and why votes like repealing the 8th Amendment in Ireland are so important. How pro-choice changes lives in an important and significant manner. Why sex education for children and teenagers is crucial and why women should have ultimate control of their bodies and as much control of their destiny as chance allows.

Explaining my own position will hopefully put things in greater perspective. As a 37 year old white, straight woman living in the UK I am supremely privileged – yet I am still not equal to a white, CIS, UK male. There are some things I want to clarify from the get-go.

Until a few years ago I would have had an abortion. Even now, as a better educated woman on the procedure itself, I’d have an abortion if my life was in danger. Now my reality is that if life and death did not come into it I’d not abort, but that is my choice and my reasons are my own – though I’ll hint at the reason being linked to how the baby is gotten out, but I’ll not scaremonger by saying more. It’s up to us as parents, carers, teachers and responsible adults to make sure children and teens are educated on all choices. ALL CHOICES.

It horrifies me that any women is put in a room with pro-life literature and forced to read it all before even being allowed near an abortion clinic. Then there are those women throughout the world who are denied anything at all. Not only do we have to pay for our menstrual cycles and have tampons and sanitary towels taxed but so many of us – 50% of the world’s population! – are denied control of our bodies. Everything from pro-lifers shooting patients and nurses outside of clinics to child brides and women dying in labour because they had no other choice than to have the child.

These are decisions ultimately made by men and unfortunately there are women who prop up this culture too by being complicit.

In Ireland a major step was taken, a step for all women in the world. Today we need to build upon that.

“Don’t let the bastards” (men, pro-lifers, governments) “…grind you down.”

In the 1960’s my parents were hippies and then they became activists. In the 70’s they had kids and had to settle, because you know, cannot politick when you are breastfeeding or at work most of the time! This was the 70’s remember! My mother did remain involved as a mother, with our schools and with the local elections. My father was a Union man, TUC and AEEU, ending up in the 1990’s as regional then eventually national rep. They always said to me (and my siblings but I am pretty sure I was the only one who listened!):

“Don’t just vote, hold those you vote in accountable.”

They showed us how to do this as well, gave us practical examples and though I cannot say I agree with their personal politics they had raised me to question, including debating with them, my parents.

Fast forward to the TwentyTeens, 2017 to be exact. I am 37 this year and for the first time in my life went to see my Member of Parliament (though technically she is a Labour Candidate), Louise Ellman. I did not expect much, I went to hear answers to my questions and to see how in touch she is with her constituents. I got a rumour debunked (about Liverpool Women’s Hospital being closed down) and she told me there were plans to move it so it was closer to better resources. What I think she needs to do is to have a page on her website called “Riverside Rumours Debunked” and then address common misconceptions. I think educating people about local politics and how Westminster works and what the Labour Party are doing would be good too. Both in person and online.

Though her Twitter account was very good her website was lacking for me. It’s a WordPress website – so of course that was not the issue! – but the design was dated, unresponsive and the info the average constituent would want (and perhaps need) wasn’t there. It was better than it was a few months ago, but it looked more like a blog (which had not been updated at all in April) then a politicians webspace. Online presence is something that is important nowadays and perhaps something local politicians could improve (using Skype to speak to constituents for example – so the housebound get to get involved). I am sure there is someone in the Labour party or this constituency who would volunteer to update it the website (as in the design not the content).

All in all I was glad I went and I intend to do more. I want to pursue the issue of the pavements in the area and how wheelchair unfriendly they are, and also get in contact with local councillors.

I encourage everyone to get involved in local politics, how else can we hold those we vote for to account?

The long term management of transverse myelitis requires attention to a number of issues. Learn more.

This Insight Report for TM is a document put together by the TM charity to help those assessing for disability benefits. I am curious how many ever read this, or indeed, how many have read the government’s criteria for what a disability is: Disability Act 2010

With my own PIP reassessment coming up I am trying not to get stressed but it’s still difficult. With so few medical professionals knowing what TM is how can I expect the assessor to know?

I made up a mnemonic for the four main causes of relapse in autoimmune patients:

These four still plague my life every single day. Currently I have an infection – I have constant issues with my toenails and because of the numbness don’t feel the ingrowing nails. I dug out the latest on my big toe on my right foot and it seems to be infected now, yay! Also it’s summer so it’s hotter, and because of the pain I am not sleeping a lot. This all, obviously, causes me stress. So atm all my symptoms are going haywire. 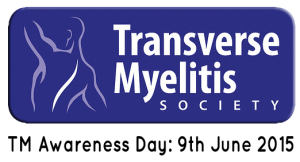 TM Awareness Day – Fact 1: A GP in the UK will, on average, encounter a case of Transverse Myelitis once in a hundred years.